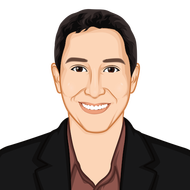 People's Pundit
News • Politics • Culture
No, Trump's Presence In The Midterms Is Not "Risky" For The GOP
Without Trump, The GOP Struggles To Turnout Voters
Rich Baris
September 05, 2022
Guest contributors: PeoplesPundit 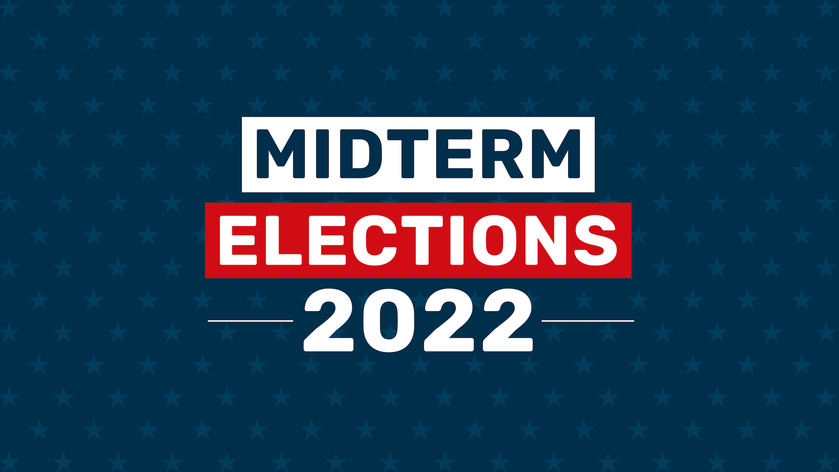 How short our collective political memories are. Here we are in September, and many of the same arguments we've heard for the last three cycles are resurfacing just in time to influence the narrative before the pivot to the post-Labor Day period.

Unsurpringly, it's coming from the usual suspects.

Let's address some of those specifically, most notably a few arguments outlined by Nate Silver.

"Upset Democratic special election wins in Alaska and New York over the past two weeks are the latest sign that the political environment might be unusual for a midterm election."

In the Alaska at-large special election, the advantage in Republican primary vote share was twice the margin Trump won the state with in 2020, and dwarfed the 36.8% total Democratic primary share of the vote.

As all these "forecasters" know, this was the first time the state implemented rank choice voting. The referendum was pushed by a coalition of Democrats and Establishment Republicans desperately manuevering to insulate incumbent Senator Lisa Murkowski from certain primary defeat at the hands of Trump-endorsed Kelly Tshibaka.

It worked, plain and simple, and more than 60% of Alaskan voters will now be representated by someone they otherwise never would've voted for, even if it is only for a few months.

It might be convienant for a liberal analyst cheering on Democrats to cite Mary Peltola's win as an example of "Republicans losing steam" or Trump being "risky for the GOP", but it's also extremely dishonest.

"The past four special elections — two in New York, one in Alaska and one in Minnesota — all occurred after the seizure on Aug. 8, and they all showed excellent results for Democrats. And Democrats have actually gained about a point on the generic ballot since then, although it’s a small enough difference that it could be statistical noise."

Let's first deal with the polling.

Perhaps Democrats are gaining. But says who, the pollsters who routinely overstate Democratic support on the generic ballot, most recently in 2020 and 2018?

The RealClearPolitics final average for the House vote was Democrats +6.8% in 2020. That polling fueled a "consensus" narrative among forecasters expecting Democrats to expand their majority in the U.S. House of Representatives by as many as 15 seats.

They lost 13 seats, including those rated Leans and Likely Democrat by Cook Political Report and 538. The Democratic advantage in the House vote was less than half the polling average.

In fact, in only three cycles—1986, 1990 and 2018—did Democrats NOT underperform their support indicated by the generic ballot. Further, in only one of those cycles Democrats outperformed, which was in 1990, albeit by a lousy two points. In 1986, the polling was right on the money. In 2018, the 1-point lead for Republicans published by Rasmussen Reports averaged down the Democratic edge in the RealClearPolitics final average. Without it, overstated 13-point leads for Democrats published by CNN and the Los Angeles Times would've almost assuredly resulted in another underperformance. 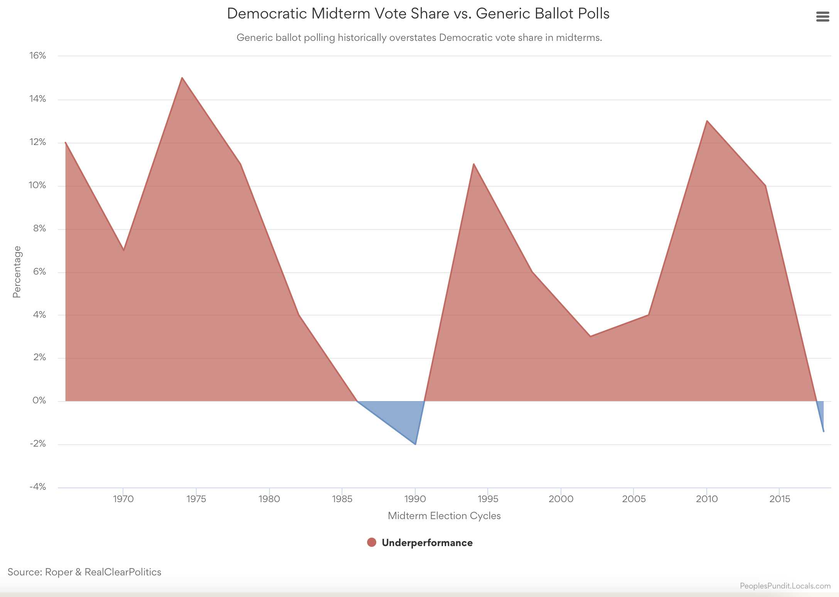 There are only a few of us who have not blown these races cycle after cycle, Big Data Poll among them. The most recent national survey we conducted at Big Data Poll did in fact find a narrowing lead for Republicans, 42.5% to 41.2%. But that wasn't fueled by increased support for Democrats on the generic ballot, but rather decreased support for Republicans as more GOP-leaning voters moved to "undecided" or out of the likely voter screen, altogether.

None of this even begins to address the issue of summer response bias favoring Democrats before Labor Day. It's real, everyone knows that it is, and yet we are subjected to these overblown conclusions each and every election cycle.

By the way, Donald Trump led Joe Biden by nearly 5 points—44.4% to 39.5%—in that very same national survey. Trump's outperformance of Generic Republicans and nominees has been consistent not only in our polling, but in other, reliably accurate firms.

In Pennsylvania, the CD Media Big Data Poll found Trump leading Biden 46.6% to 40.0%, while GOP gubernatorial and senatorial candidates ranged from 40.0% to 43.2%. In Georgia, Trump is outperforming GOP candidates by an even larger margin. Emerson College found the same disparity in both states, as well.

And there in lays the major problem with this narrative.

While we certainly see red flags for Republicans, we see other variables being the cause of it.

Put bluntly, elections in which Trump has not played a signfiicant role, Republican enthusiasm and turnout, thus overall electoral performance, has suffered.

"When that seizure occurred, a certain strain of conventional wisdom suggested that this could help Republicans in the midterms, such as by increasing the enthusiasm of GOP voters.2

If that’s true, it’s not showing up in the data."

First, notice how this analysis convienantly omits the historically high turnout in post-raid Republican primaries in Wyoming and Wisconsin.

In the former, normal turnout in the neighborhood of 100,000 votes swelled to more than 170,000. In the latter, what was believed to be a close proxy race pitting Trump against Mike Pence, ended up not at all that close. Trump-endorsed Tim Michels fairly easily defeated the Pence-endorsed former popular lieutenant governor, and Republican turnout increased by nearly 20% to 53% of the total two-party turnout, a reversal from 2018 when Democratic primary votes made up 53% of total turnout.

Furthermore, I reject the example of the MN-01, outright.

It's true Trump won the district by a larger margin in 2020, but that's exactly the point. He was not involved in that race, as was the case in NY-19.

Marc Molinaro ran a typical Republican campaign. Turnout suffered because of it and other factors, not because of Trump, who only lost it by 1.5% (49.8% to 48.3%). Yet, Molinaro still only lost by a point in a district the prior Democratic incumbent won by nearly 12 points with more than 350,000 votes, 52.5% to 42.9%. Only about 130,000 voters participated in the special, with the "missing" voters being from more working class precincts.

The Democratic-leaning "analysts" reading into NY-19 are beginning to remind me a little of Republican wishful-thinkers surrounding GA-06 in 2017. While Karen Handel managed to fend off John Ossoff in the special election, Republicans were unwilling to acknowledge the predictive value of the swing in the margin, itself.

Also worth noting, Republicans were at a structural disadvantage given Democrats were holding two primaries in the absense of a single GOP primary, which partly explains the closer-than-expected result in NY-23. Dutchess County, which voted for Biden in 2020, was the one area in which there was a Republican primary, and Molinaro swung it Republican.

For the last three cycles, we've had to suffer through similar narratives disguised as election analysis. Without Trump, the GOP would've lost their majority in the U.S. Senate in the last midterm election cycle. Judging by primary and special election pariticpation rates when he's not holding their hand, it's become crystal clear they are unable to motivate key voting blocs without him.

Perhaps that's what Nate Silver and others hope to help Democrats accomplish.

Nevertheless, in comparing congressional vote shares to presidential vote shares in Minnesota, ignoring entire key races and engaging in other statistical contortions, the left-leaning forecast crowd is hoping we don't notice they're falling back on apples to oranges because it's convienant, not because it's predictive.

Join the People's Pundit Community
To read more articles like this, sign up and join my community today
156
View All
8
What else you may like…
Videos
Podcasts
Posts
Articles
Live Streamed on December 22, 2022 8:30 PM ET

4Patriots Survival Food Kits
https://4patriots.com/TPP
Enter Promo Code TPP10 to get 10% off all other orders!

Live elections update for Locals. Let's do this because I'm chomping at the bit, but the kid and his shows are in the background and this will not be formal.

Rich Baris@PeoplesPundit
April 13, 2021
Barnes and Baris Episode 29: What Are the Odds?

Watch Live 3:00 PM EST — Robert Barnes and Rich Baris discuss in detail bombshell results within the Public Polling Project for Early Spring 2021, and more civil unrest amid the trial of Derek Chauvin for the death of George Floyd. 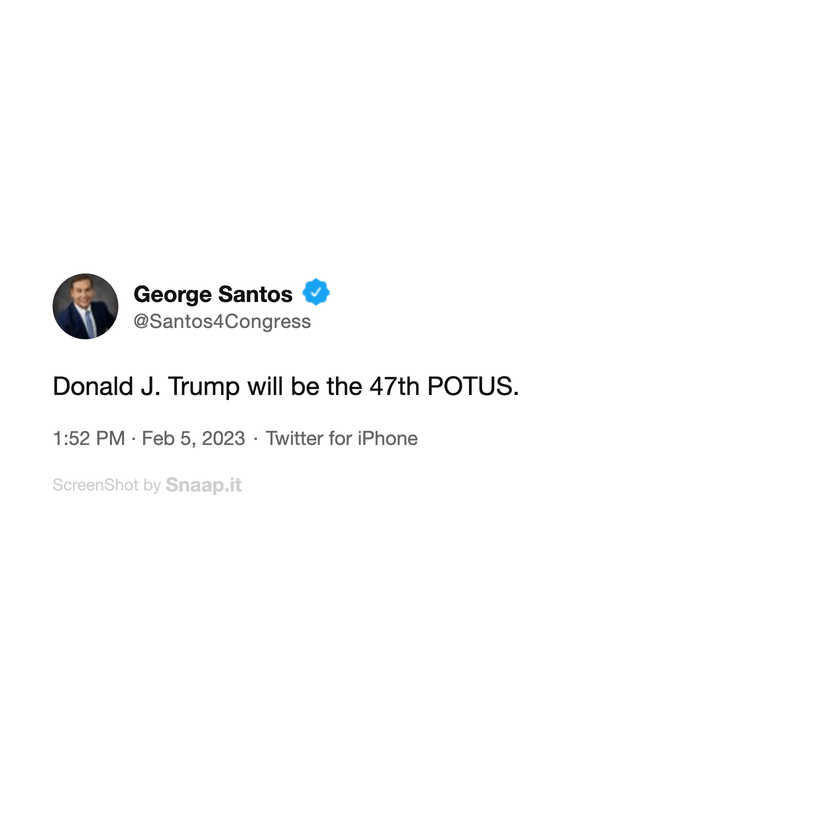 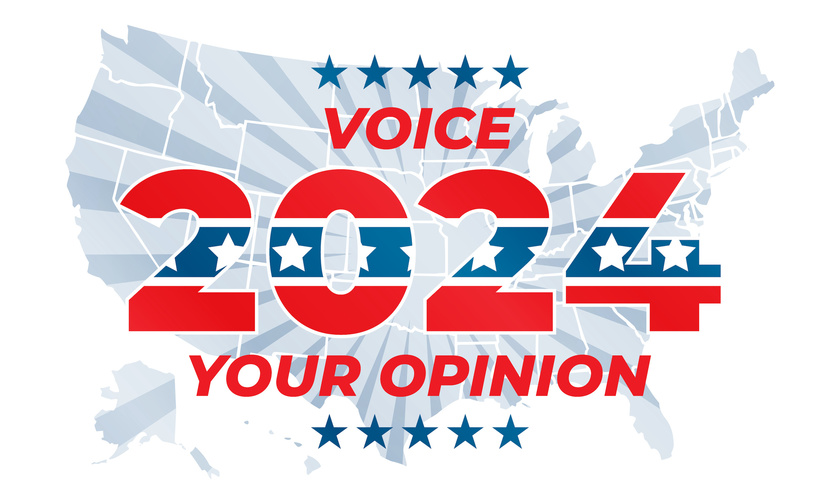 Only for Supporters
To read the rest of this article and access other paid content, you must be a supporter
Read full Article
73
View All
21
Reply
See More
Sign Up To People's Pundit
Sign Up for free to see more from this community or subscribe to People's Pundit for $5/month to support Peoples Pundit for more interaction and exclusive content.
Login Signup
Available Now

A short intro for what we're doing on Locals and why you should join The People's Pundit Community!

320
View All
25
Reply
Don’t have a Locals account yet? SIGN UP
I’m already a member Log in
Please keep this window open while your file is uploading...